The "Chupacabra" (Spanish pronunciation: [tʃupaˈkaβɾas], from chupar "to suck" and cabra "goat", literally "goat sucker"), is a legendary cryptid rumored to inhabit parts of the Americas.

It is associated more recently with sightings of an allegedly unknown animal in Puerto Rico (where these sightings were first reported), Mexico, and the United States, especially in the latter's Latin American communities.

The name comes from the animal's reported habit of attacking and drinking the blood of livestock, especially goats. Physical descriptions of the creature vary. Eyewitness sightings have been claimed as early as 1990 in Puerto Rico, and have since been reported as far north as Maine, and as far south as Chile. It is supposedly a heavy creature, the size of a small bear, with a row of spines reaching from the neck to the base of the tail.

Biologists and wildlife management officials view the chupacabras as a contemporary legend.

The first reported attacks occurred in March 1995 in Puerto Rico. In this attack, eight sheep were discovered dead, each with three puncture wounds in the chest area and completely drained of blood. A few months later, in August, an eyewitness, Madelyne Tolentino, reported seeing the creature in the Puerto Rican town of Canóvanas, when as many as 150 farm animals and pets were reportedly killed. In 1975, similar killings in the small town of Moca, were attributed to El Vampiro de Moca (The Vampire of Moca).

In July 2004, a rancher near San Antonio, Texas, killed a hairless dog-like creature, which was attacking his livestock. This animal, initially given the name the Elmendorf Beast, was later determined by DNA assay conducted at University of California, Davis to be a coyote with demodectic or sarcoptic mange.

In October 2004, two more carcasses were found in the same area. Biologists in Texas examined samples from the two carcasses and determined they were also coyotes suffering from very severe cases of mange. In Coleman, Texas, a farmer named Reggie Lagow caught an animal in a trap he set up after the deaths of a number of his chickens and turkeys. The animal was described as resembling a mix of hairless dog, rat, and kangaroo. Lagow provided the animal to Texas Parks and Wildlife officials for identification, but Lagow reported in a September 17, 2006 phone interview with John Adolfi, founder of the Lost World Museum, that the "critter was caught on a Tuesday and thrown out in Thursday's trash."

In April 2006, MosNews reported that the chupacabras was spotted in Russia for the first time. Reports from Central Russia beginning in March 2005 tell of a beast that kills animals and sucks out their blood. Thirty-two turkeys were killed and drained overnight. Reports later came from neighboring villages when 30 sheep were killed and had their blood drained. Finally, eyewitnesses were able to describe the chupacabras. In May 2006, experts were determined to track the animal down.

In mid-August 2006, Michelle O'Donnell of Turner, Maine, described an "evil looking" rodent-like animal with fangs that had been found dead alongside a road. The animal was apparently struck by a car, and was unidentifiable. Photographs were taken and witness reports seem to be in relative agreement that the creature was canine in

appearance, but in widely published photos seemed unlike any dog or wolf in the area. Photos from other angles seem to show a chow- or akita-mixed breed dog. It was reported that "the carcass was picked clean by vultures before experts could examine it". For years, residents of Maine have reported a mysterious creature and a string of dog maulings.

In May 2007, a series of reports on national Colombia news reported more than 300 dead sheep in the region of Boyaca, and the capture of a possible specimen to be analyzed by zoologists at the National University of Colombia.

In August 2007, Phylis Canion found three animals in Cuero, Texas. She and her neighbors reported to have discovered three strange animal carcasses outside Canion's property. She took photographs of the carcasses and preserved the head of one in her freezer before turning it over for DNA analysis.Canion reported that nearly 30 chickens on her farm had been exsanguinated over a period of years, a factor which led her to connect the carcasses with the chupacabras legend. State Mammologist John Young estimated that the animal in Canion's pictures was a Gray Fox suffering from an extreme case of mange.

In November 2007, biology researchers at Texas State University–San Marcos determined from DNA samples that the suspicious animal was a coyote. The coyote, however, had grayish-blue, mostly hairless skin and large fanged teeth, which caused it to appear different from a normal coyote. Additional skin samples were taken to attempt to determine the cause of the hair loss.

On January 11, 2008, a sighting was reported at the province of Capiz in the Philippines. Some of the residents from the barangay believed that it was the chupacabras that killed eight chickens. The owner of the chickens saw a dog-like animal attacking his chickens.

On August 8, 2008, a DeWitt County deputy, Brandon Riedel, filmed an unidentifiable animal along back roads near Cuero, Texas on his dashboard camera. The animal was about the size of a coyote but was hairless with a long snout, short front legs and long back legs. However, Reiter's boss, Sheriff Jode Zavesky, believes it may be the same species of coyote identified by Texas State University–San Marcos researchers in November 2007.

In September 2009, CNN aired a report showing closeup video footage of an unidentified dead animal. The same CNN report stated that locals have begun speculating the possibility that this might be a chupacabras. A Blanco, Texas, taxidermist reported that he received the body from a former student whose cousin had discovered the

animal in his barn, where it had succumbed to poison left out for rodents. The taxidermist expressed his belief that this is a genetically mutated coyote.

On September 18, 2009, Taxidermist, Jerry Ayer, sold the Blanco Texas Chupacabra to the Lost World Museum. The museum, as reported in the Syracuse Post Standard on 9/26/09, is placing the creature on display as they work with a unnamed university to have the remains tested.

In July 2010, there were reports of chupacabras being shot dead by animal control officers in Hood County, Texas. A second creature was also reportedly spotted and killed several miles away. However, an officer of Hood County animal control said Texas A&M University scientists conducted tests and identified the corpse as a "coyote-canine hybrid" with signs of mange and internal parasites. The second reported chupacabra, shot July 9 about 8 miles south of Cresson, was eaten by vultures before it could be taken for testing. 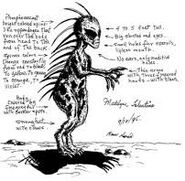