View source
watch 01:36
We're Getting Mutants in the MCU - The Loop
Do you like this video?
Play Sound

The Flatwoods Monster, (Kelansilmora corinthaliaerini) also known as the Braxton County Monster or the Phantom of Flatwoods, is an alleged unidentified extraterrestrial or cryptid reported to be sighted in the town of Flatwoods in Braxton County, West Virginia, on September 12, 1952.

Stories of the creature are an example of a purported close encounter of the third kind.

At 7:15 PM on September 12, 1952, two brothers, Edward and Fred May, and their friend Tommy Hyer (ages 13, 12, and 10 respectively) witnessed a bright object cross the sky. The object appeared to come to rest on land belonging to local farmer G. Bailey Fisher.

Upon witnessing the object, the boys went to the home of the May brothers' mother, Kathleen May, where they reported seeing a UFO crash land in the hills. From there, Mrs. May accompanied by the three boys, local children Neil Nunley (14) and Ronnie Shaver (10), and 17 year old West Virginia National Guardsman Eugene 'Gene' Lemon, traveled to the Fisher farm in an effort to locate whatever it was that the boys had seen.

Lemon's dog ran ahead out of sight and suddenly began barking, and moments later ran back to the group with its tail between its legs. After traveling about ¼ of a mile (400 m) the group reached the top of a hill, where theyreportedly saw a large pulsating "ball of fire" about 50 feet (15 m) to their right. They also detected a pungent mist that made their eyes and nose burn.

Lemon then noticed two small lights over to the left of the object, underneath a nearby oak tree and directed his flashlight towards them, revealing the creature, which was reported to have emitted a shrill hissing noise before gliding towards them, changing direction and then heading off towards the red light. At this point the group fled in panic.

Upon returning home Mrs. May contacted local Sheriff Robert Carr, and Mr. A. Lee Stewert, co-owner of the Braxton Democrat, a local newspaper. Stewert conducted a number of interviews and returned to the site with Lemon later that night where he reported that "there was a sickening, burnt, metallic odor still prevailing". Sheriff Carr and his deputy Burnell Long searched the area separately, but reported finding no trace of the encounter.

Early the next morning; on Saturday September 13, Mr. A Lee Stewart visited the site of the encounter for a second time and discovered two elongated tracks in the mud, as well as traces of a thick black liquid. He immediately reported them as being possible signs of a saucer landing based on the premise that the area had not been subjected to vehicle traffic for at least a year.

It would later be revealed that the tracks most likely belonged to a 1942 Chevrolet pickup truck driven by local Max Lockard, who had gone to the site to look for the creature some hours prior to Stewert's discovery.

After the event, Mr. William and Donna Smith, investigators associated with Civilian Saucer Investigation, LA, obtained a number of accounts from witnesses who claimed to have experienced a similar or related phenomena. These accounts included the story of a mother and her 21 year-old-daughter, who claimed to have encountered a creature with the same appearance and odor a week prior to the September 12 incident; the encounter reportedly affected the daughter so badly that she was confined to Clarksburg Hospital for three weeks.

They also gathered a statement from the mother of Eugene Lemon, in which she said that, at the approximate time of the crash, her house had been violently shaken and her radio had cut out for 45 minutes, and a report from the director of the local Board of Education in which he claimed to have seen a flying saucer taking off at 6:30 on the morning of September 13 (the morning after the creature was sighted).

This Cryptid was also the insparation for the Uglydoll Flatwoodsey. 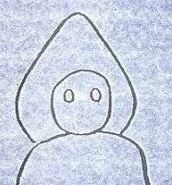 Witness drawing from the incident.
Community content is available under CC-BY-SA unless otherwise noted.
Advertisement