A Ningen is a Cryptid that is located in the oceans of Antarctica and southern Asia. It has several appearances and is at least 20-30 meters long. It has many appearances and has pale white skin. It has multiple appearances including above water and underwater appearances.

The Ningen has been described as being a humongous, “blubbery, whale-like creature,” whose smooth, pale form vaguely resembles the head, torso and appendages of a human being.

That having been noted, there are some eyewitnesses who have testified that it has a mermaid-like tail rather than two hind “legs” and others who insist that there are what resemble “hands” complete with five fingers at the ends of its tendril-like arms.

These beasts have supposedly been seen in the Pacific, Antarctic and Atlantic Oceans, and are always described as being extraordinarily large with a whitish complexion. Many observers have also reported that these animalshave no distinct facial features save for two, huge eyes and a mouth-like slit. According to most accounts, these creatures are primarily nocturnal and tend to thrive in frigid, arctic waters.

Initial reports of these marine animals were said to have emanated from the tail end of the 20th Century, which is strange considering how many centuries mariners have been traversing the world’s seas with nary a mention of these bizarre and purportedly gigantic beasts, but before we try and figure out what these things actually are, let’s take a look at what little history we have regarding these captivating creatures. 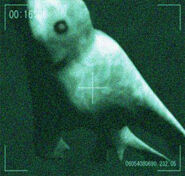 One appearance of a Ningen. 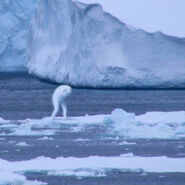 Artist's rendition of an above water Ningen.

Another artist rendition of a Ningen, resembling a Mermaid.

A photo of a Ningen swimming. 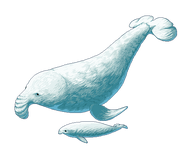