The Tatzelwurm is a mythological animal, a worm-like cryptid. In Alpine folklore, the Tatzelwurm is a stubby, lizard-like creature that resides in European countries. It takes the appearance of a cat with the hind-end of a serpent with no hind legs.

It is rumored to live in several areas of Europe, including the Austrian, Bavarian, Italian and Swiss Alps. It has several regional names including Stollenwurm, Springwurm, Arassas and Praatzelwurm.

In 1934 a Swiss photographer named Balkin allegedly saw a strange creature near a log and photographed it. The resulting interest in the creature inspired

the Berliner Illustrierte to sponsor an expedition in search of the Tatzelwurm, but the expedition was a failure and interest quickly faded.

Tatzelwurm sightings have continued to the present day, and German cryptozoological researcher Ulrich Magin has published several articles in Fortean Times'  and his own magazine Bilk documenting them. 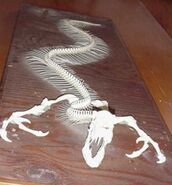 The skeleton of the creature